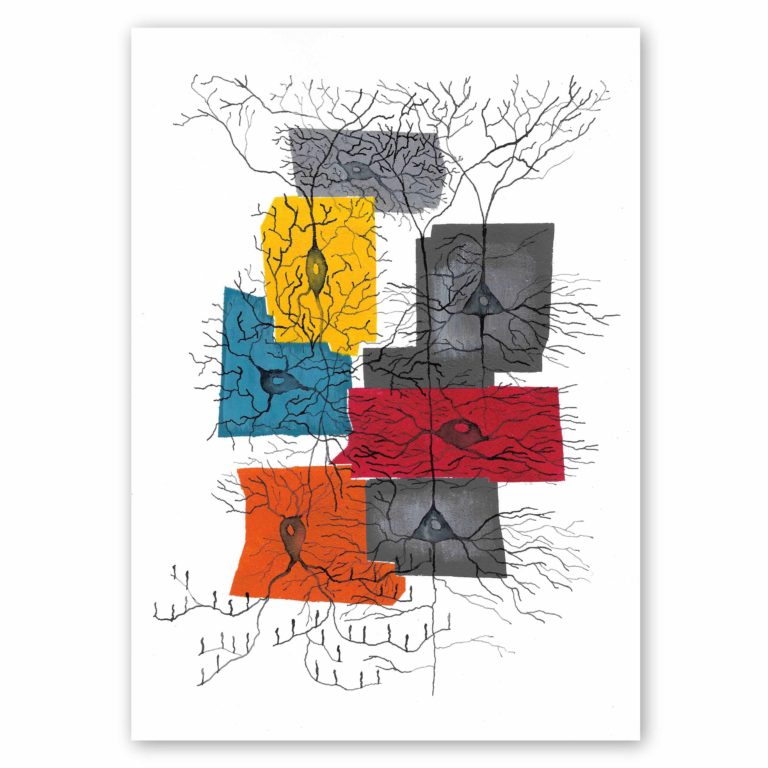 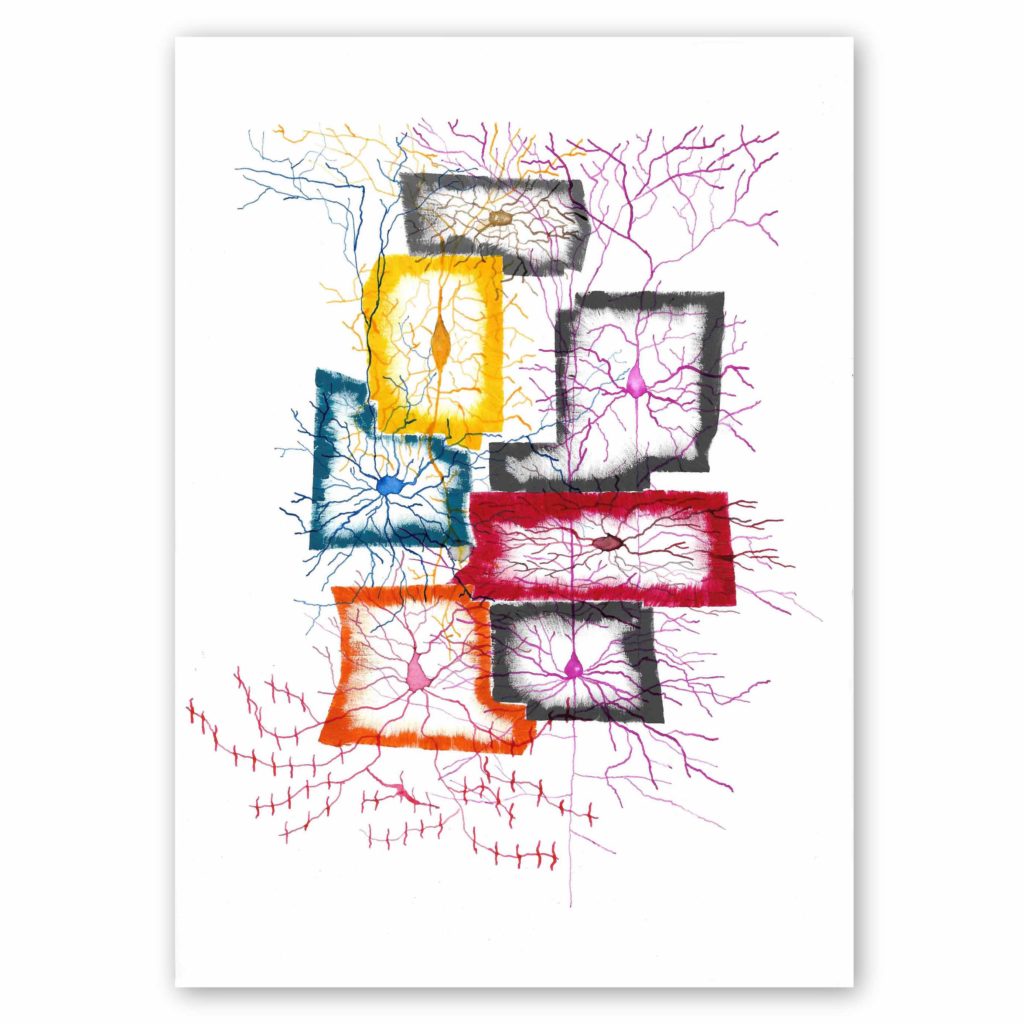 These paintings depict brain cells, or neurons, in the cerebral cortex. The cerebral cortex is the outer layer of the brain and is important for a lot of processes taking place in the brain including thinking, awareness, memory, perception and motor control. As a scientist I focused on visual perception and there is a dedicated area in the cortex that deals with the input from the eyes: the visual cortex.

There are many different types of neurons in the cortex, but all these types can be split in two: excitatory neurons and inhibitory neurons. When talking about neurons we often think of excitatory neurons, these neurons give positive signals to other neurons increasing their activity. Inhibitory neurons, however, give off a negative signal that inhibits other neurons, thereby decreasing their activity. These neurons are also called interneurons. Different types of excitatory neurons and interneurons form small networks or micronetworks and interact in specific ways. Some interneurons connect only to certain types of other interneurons while others also connect to excitatory neurons. By finetuning all the connections you can perform complicated calculations. The point where two neurons connect and pass over signals from one to the other is called a synapse. At the synaptic level even more finetuning is going on as the strength of the synapses are constantly adjusted. Then on a larger scale, all the micronetworks are repeated across the cerebral cortex with variations that are specific to the processing tasks they have to perform. You can see that the complexity of it all builds up very quickly resulting in an organ that on many fronts, outperforms our best computers – the brain is the most complex structure we know of in the universe.

The painting depicts part of a micronetwork consisting of several different types of interneurons. The excitatory neurons, of which two are shown in the image, are depicted as one neuron type. In fact, however, these also consist of many sub-types, but scientists are still working on how to classify them into different types. More work has been done on the classification of interneurons, although there is no consensus yet on the different types as there are different methods in use to separate interneurons into types. Furthermore, the more we find out about them the more sub-types are further sub-divided.

In the painting I have chosen to sub-divide the interneurons according to a method that looks at the expression of certain genes. These gene expressions result in the presence of a certain protein in one type of interneuron that is not present in another. This can then be used to differentiate between interneuron types. As this is just one way of separating the interneurons and by far not perfect, I have placed the neuron types in wonky boxes instead of neat ones to highlight the classification is imperfect and still changing.

If you click on the box below, a print version of the painting is shown including the names of the neurons depicted. Both the interneuron names based on the gene-expression and on their shape (morphology) are shown. 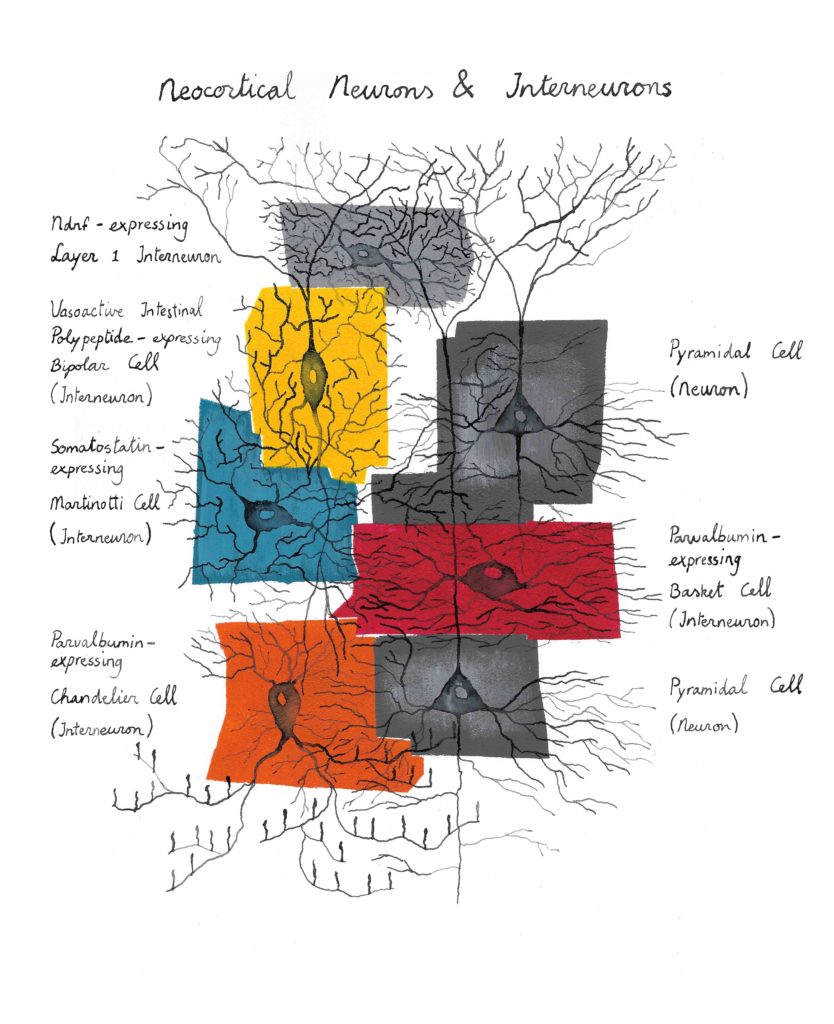 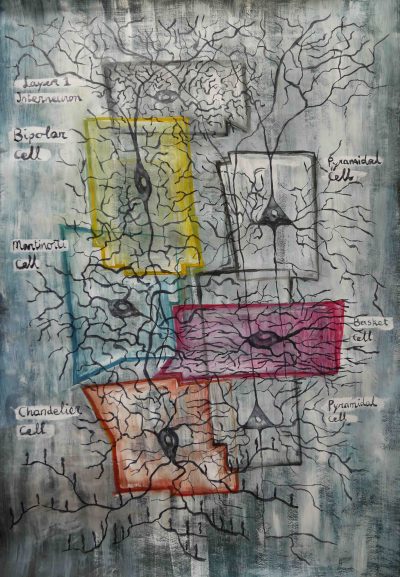 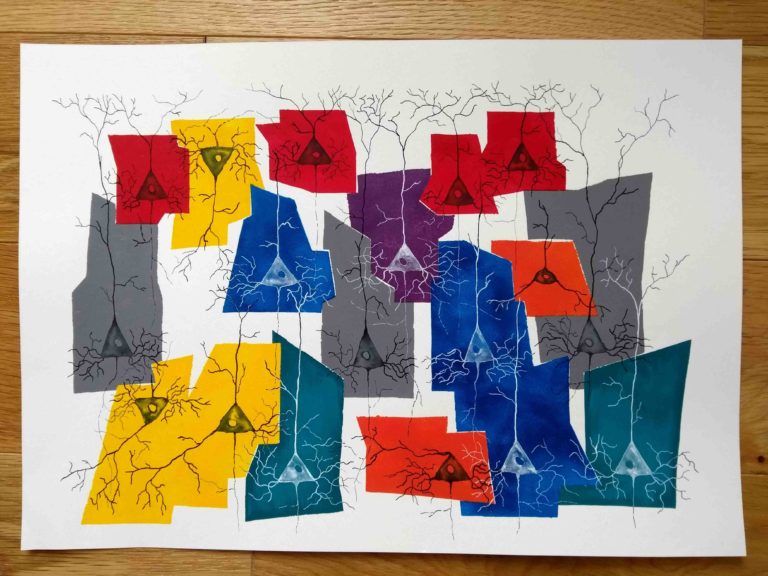 This work is based on a recent paper (Kanari et al., 2019) on the classification of so called pyramidal neurons in the cerebral cortex (the grey wrinkly outer area of the brain). Pyramidal neurons comprise about 80-85% of neurons in the cortex and come in different types with different functions. It has, however, been quite tricky to tell the different pyramidal cells apart. Some pyramidal cells look really quite different in shape, but for many it is hard even for experts that are trained in observing hundreds of neurons to properly separate them. The paper presents a method to divide the pyramidal cells in subtypes based on their shape.

In the painting at the top I’ve made an overview of all the cells the paper identifies. The colour and shape of the surfaces the neurons are painted on tells you something about commonalities in the shape, also called morphology, of the neurons. The vertical position of the surfaces tells you something about the cortical layers the neuron types are found in (the top being the outer layer at the surface of the brain). The cells in the red surfaces, for example, are all pyramidal neurons in layers 2 and 3 (there are 6 layers in total). You see a forking process going towards layer 1, these are called apical dendrites (see image below) and in most pyramidal neurons these extend towards higher layers. But there are striking exceptions in the yellow and orange surfaces. Here things get weird as some neurons have apical dendrites pointing towards deeper layer, some have two or three apical dendrites and some neurons seem to be placed upside down, these are so called inverted pyramidal neurons. In most neurons the apical dendrites fork as the dendrite extends, these are called tufted cells. This does not, however, happen in the blue cells, which are therefore untufted. Like with the image Cortical neurons & interneurons I gave the surfaces wonky shapes. This is to indicate that it is not a final subdivision of the pyramidal neuron types and it will be exciting to see how the classification develops in the future.

One of the reasons I really like the paper on pyramidal classification is that it is a nice example of the process of science. In order to make big breakthroughs and discoveries it is important to lay the groundwork, focussing on the details and meticulously map things out, classify cells, index all the data collected and so on. The real heroes in science are all the students, PhD candidates, postdocs and lab leaders collaborating together to find out how everything works.

Three tufted layer 2 pyramidal cells filled with dye. In the painting these neurons are depicted in the red surfaces. Hover over the image to reveal the different elements of these neurons. 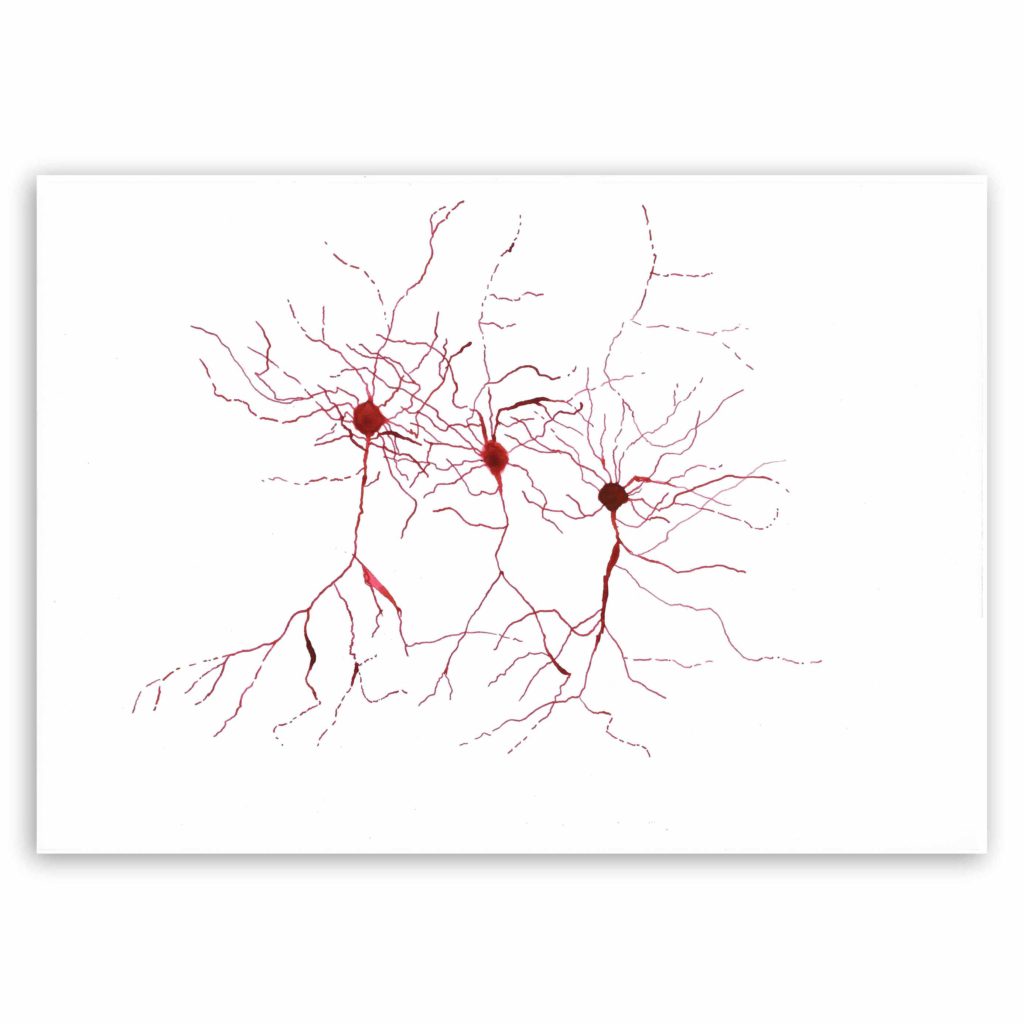 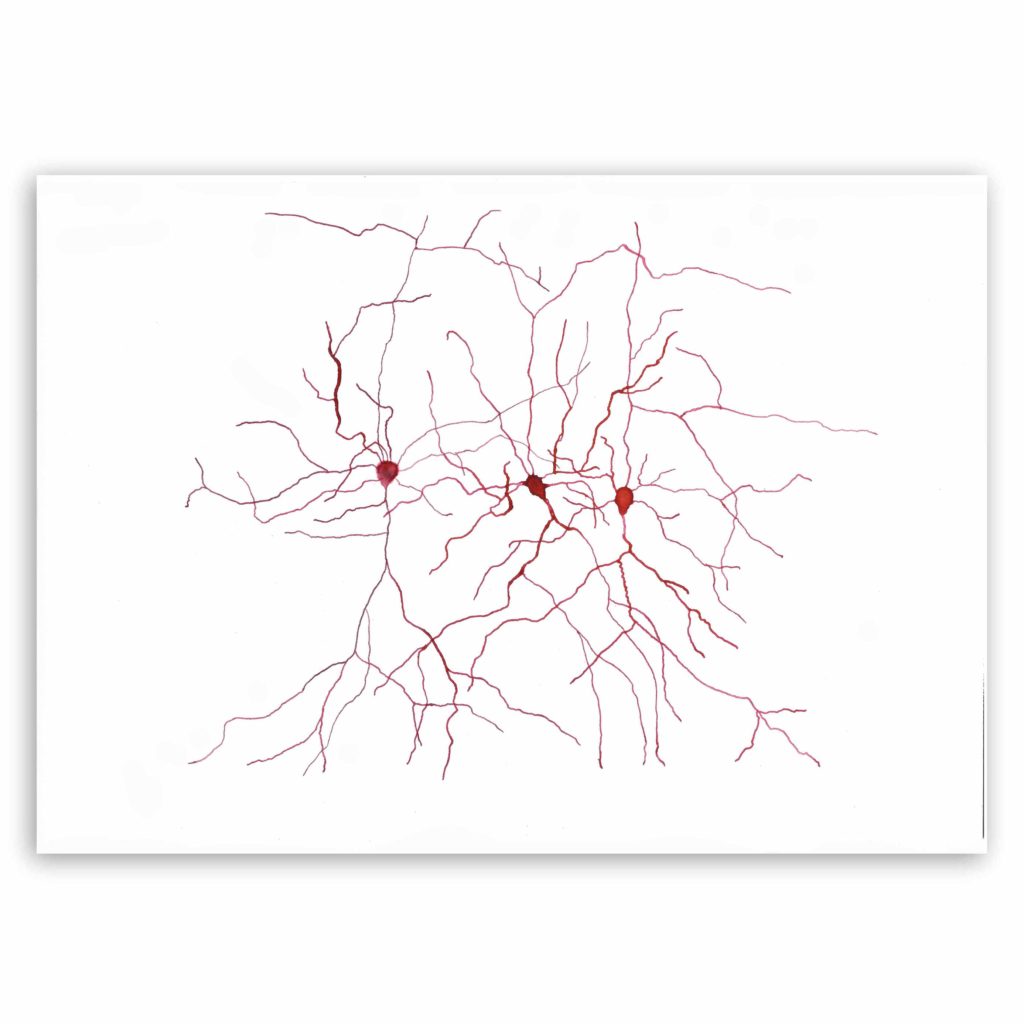 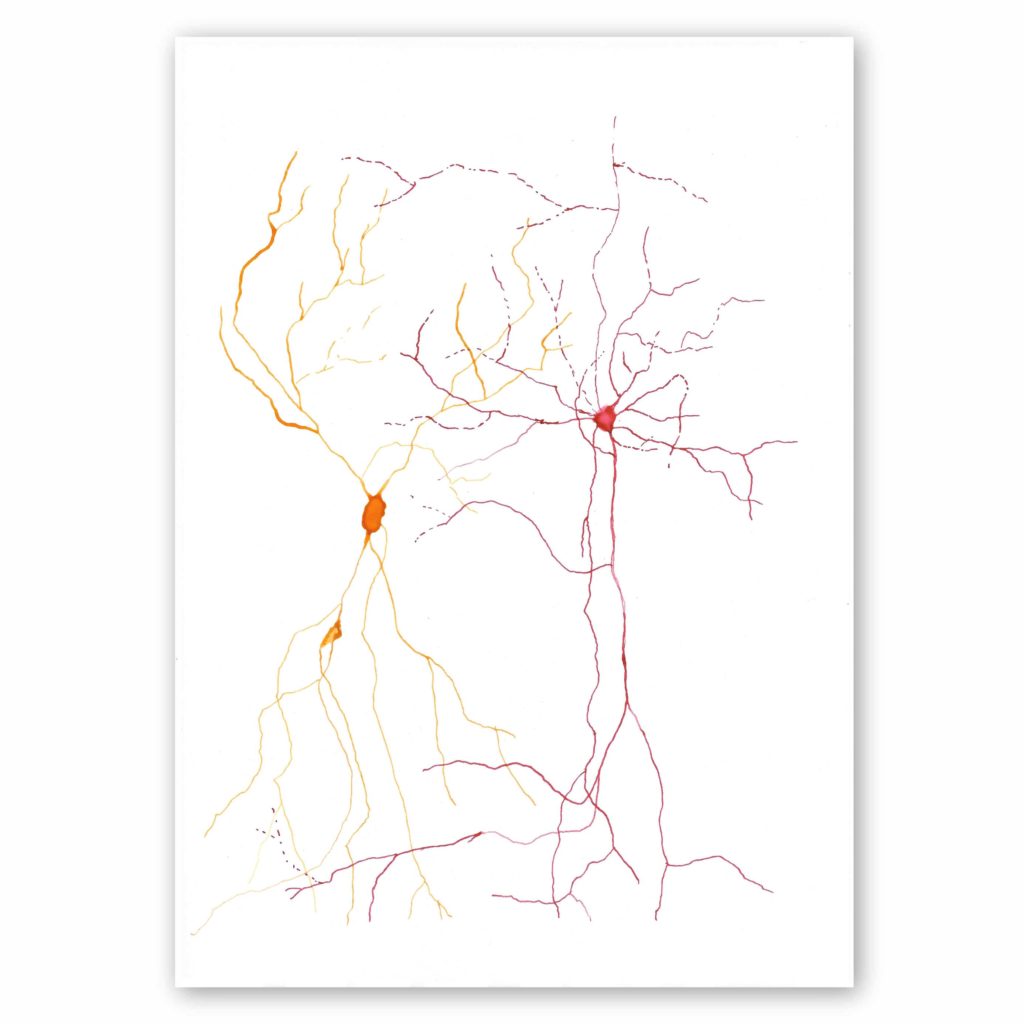 The red cells are excitatory neurons called pyramidal neurons because of the shape of the cell body, the “blob” in the middle that has a slight triangular shape. This shape is exaggerated in the “Neurons & interneurons” painting.

The yellow cells are so called bipolar cells, recognisable by their processes protruding from the top and bottom of the cell body.

As a neuroscientist I am interested in the properties of different neuron types and how they communicate with each other. In order to learn about the behaviour of neurons I record from them to measure how active they are and whether they receive signals from other neurons. One way in which to identify the type of a neuron is to look at its shape. The drawings shown above are of neurons that I have injected with a colour to make them visible.

Paintings of neurons in surfaces 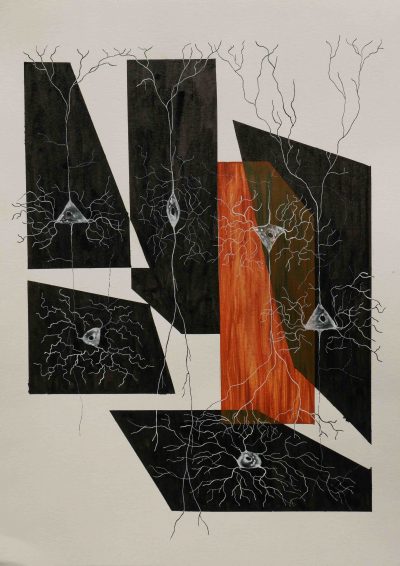 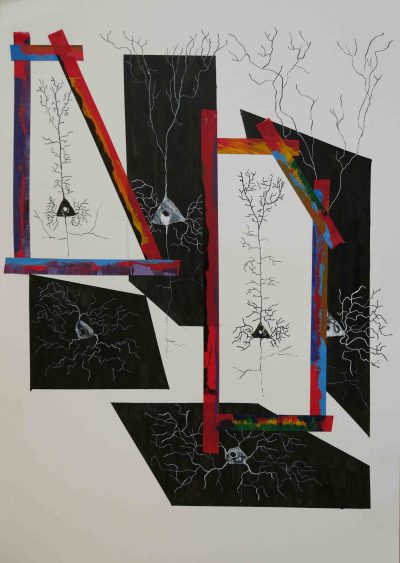 The painting on the left depicts three pyramidal neurons and three interneurons, the bottom two are a basket cell and a martinotti cell, and the middle one is a bipolar cell. The pyramidal cell in the orange surface is an inverted pyramidal neuron. They really exist and look the same as normal pyramidal cells apart from their bizarre feature of being upside down. Nobody knows exactly why they are that way and what they do.

The painting on the right depicts four pyramidal neurons and two interneurons, a basket cell and a martinotti cell. The two neurons in the areas delimited by red tape are not yet fully developed. They are smaller than adult neurons and have a lot of processes that have yet to be pruned away. The red tape is part of the process of painting the black and coloured surfaces and is removed afterwards. As these two neurons are not yet in their final stage, I left the surface in an unfinished state as well. 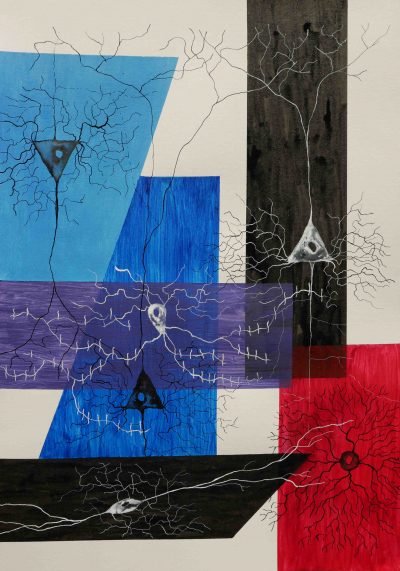 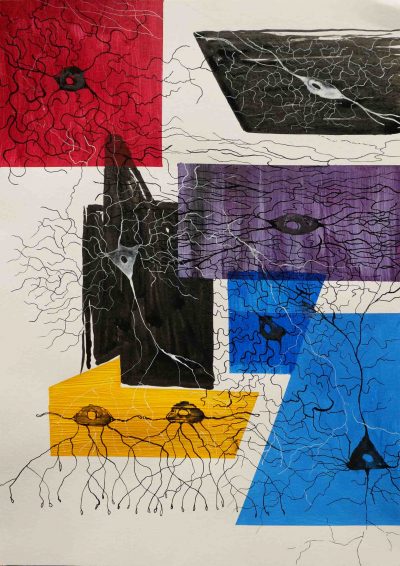 Left: These are cortical neurons, apart from the one in the red surface. This is a so called starburst amacrine cell and is located in the retina.

Right: These are all cortical neurons apart from the two in the yellow surface. These are horizontal cells that are again located in the retina. 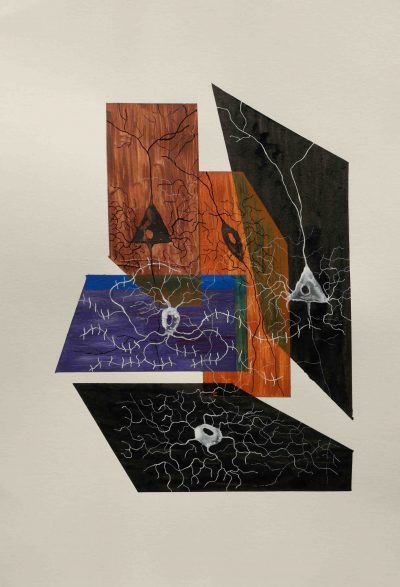 These cells are all cortical neurons. 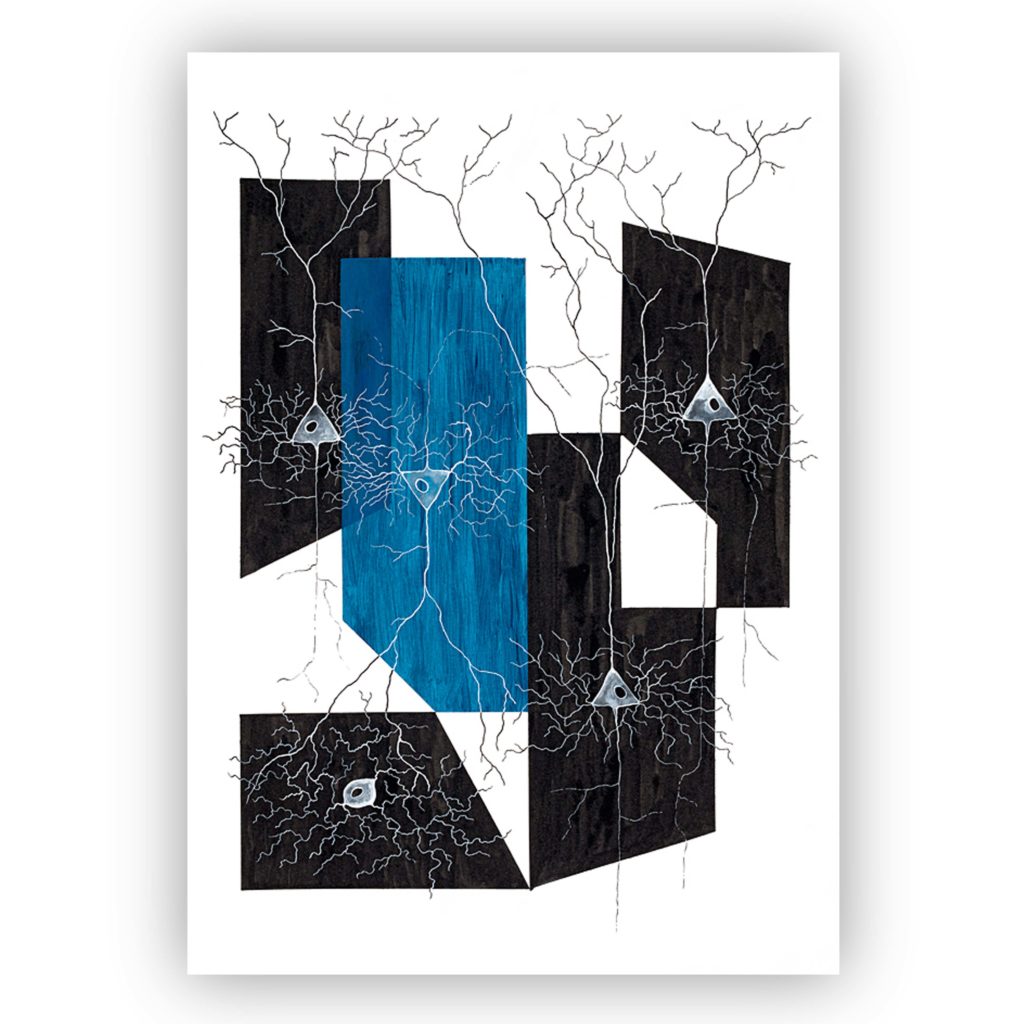 The upside down (blue)

Any cookies that may not be particularly necessary for the website to function and is used specifically to collect user personal data via analytics, ads, other embedded contents are termed as non-necessary cookies. It is mandatory to procure user consent prior to running these cookies on your website.